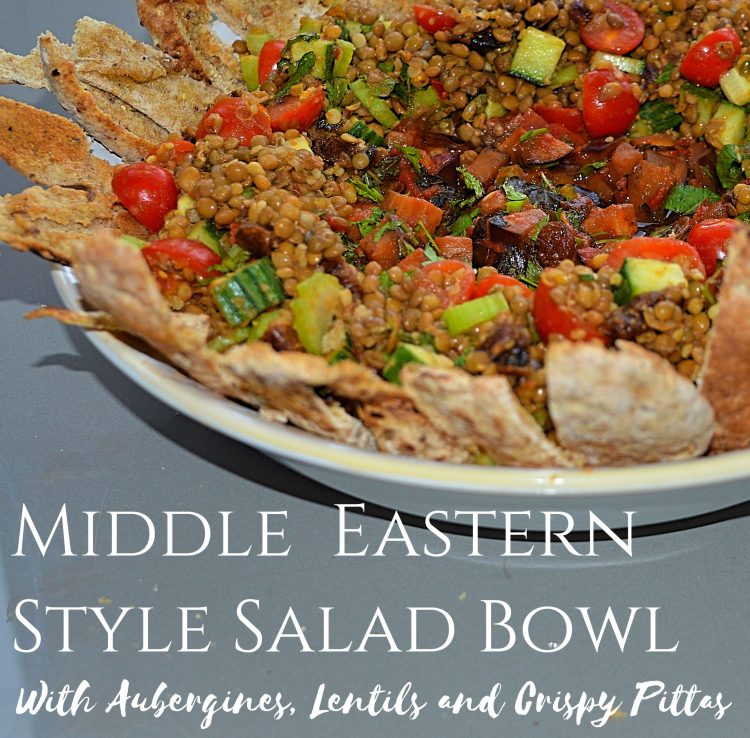 Posted by floatcornwall on August 20, 2018 | Featured | No Comments

This show stopping salad is actually a mixture of 3 dishes which you could rightfully serve separately if you fancied; an aubergine dip I’ve been making for barbecues for years; originally from a River Cottage cookbook, an incredibility great (and easy to make) lentil salad which could be a stand alone show stopper; the mixture of spiciness and sweetness is (believe me) incredible. And the crispy pittas are inspired by a meal I had at The Eden Project this week. Put it together and what have you got? (well, not bibaty bobaty bo) but instead this self titled “Middle Eastern Salad Bowl.”

For the Aubergine Dip

Small bunch each of mint and parsley, chopped well

Fry up the onion, garlic and celery with the olive oil. When soft, add the aubergine and cook for another 5-10 minutes. Then add the tin of tomatoes along with the balsamic and sugar, raisins, capers and olives. Cook for another 10 minutes and mix in the fresh herbs at the end. Spoon this mixture into the centre of a large salad bowl.

Half a cucumber, cubed

A couple of handfuls of cherry tomatoes, sliced in half

A handful of dates, sliced

The juice of 1 lime

Half a teaspoon allspice

Salt and pepper to taste

Small bunch of each mint and parsley, chopped well

Literally just throw everything together and mix well. When you’ve finished, arrange this around the aubergine dip to create a sort of outer circle of complementary taste.

For the Crispy Pittas

Cut the pittas in half and then again into large strips. Brush with olive oil and throw under the grill for 5-10 minutes until brown and crispy. Arrange the crispy pittas around the edge of the lentils so that they can be used to “scoop” up the lovely salady-ness. Serve immediately before the pittas go soggy!